As a young student at Central College in Pella, Iowa, I worked for the campus radio station. Iowa’s governor, the honorable Harold Hughes, had announced that he was not seeking re-election so that he could run for the United States Senate. When word came that he was making a campaign stop at a restaurant in downtown Pella I was asked to go and get an interview. I was both excited and nervous – a big assignment for a rookie radio guy. On the big day at the appointed hour I entered the restaurant and surveyed the crowd. There was no problem spotting the governor – not only did I recognize him but he was an imposing figure; I couldn’t miss him. I eventually identified myself and asked if I could do an interview. He said he’d be with me shortly. So I sat off to the side and waited.

A few minutes passed as people of much greater stature than me kept going up to him and asking for his time. But all of a sudden I heard him say to those gathered around him, “I promised this young man an interview so I need to give him some time now.” Wow – impressive; a politician and a man of his word. (I guess it’s not always an oxymoron!) At that moment I felt I was #1 and on top of the world – and even more nervous! Then he sat down next to me and immediately made me feel at ease. I turned on my little recorder and began the interview. One of the questions I posed to him had to do with whether nor not he had mixed feelings since he was leaving office after a doing good job and could easily be re-elected. He had made many friends and earned deep respect. Yet he was also venturing into new territory and was already being mentioned as a future Democratic candidate for President. I must confess I can’t remember what he said but I do recall that I was impressed with his thoughtful response. I finished my relatively short interview still #1 and on top of the world.

Immediately after completing the interview he began his public remarks so I turned the recorder back on again. I’ll never forget the gist of his opening remarks – he said something to the effect of “I was just being interviewed by this young man here from Central College, and he asked me a very good and thought-provoking question.” He then opened his brief speech by sharing his reflections on my question! Wow! Now I knew I liked this man! And that’s saying a lot for one who born and bred a Republican! If it was possible to feel higher than #1 and on top of the world, I was feeling it. All I could think of was that when we played highlights of his remarks over the air people would hear his opening references to me (true- since he hadn’t mentioned my name very few would know to whom he was referring; but I would know! And, yes, I confess to a little – make that a lot – of pride!) Needless to say I followed his 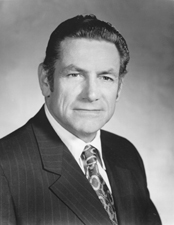 career with great interest. In many ways, he was #1 in my book.

And while I could share much more about the faith and humility of Harold Hughes, my point right now is he became #1 in my eyes because he made me feel like I was #1. He understood that “If you want to be #1, make someone else #1.” I don’t mean to say that we ought to strive to be #1 so we can lord it over others; that is pride and self-centeredness. It has more to do with earning respect and love from others. We gain respect and love when we show respect and love. We gain the right to be heard when we give the right to be heard. We gain the opportunity to speak about Jesus when we live like Jesus. In the context of what I’m saying, Jesus becomes #1 to people because He makes them feel like they’re #1. Just think about the man by the pool, the woman at the well, Zaccheus, the lepers, the lame, the blind…the list of those Jesus made to feel #1 endless.

So this week, wherever you are and whoever you are with: “If you want to be #1, make someone else #1.” I have a hunch that if you do, Jesus will be the real #1.