I’ve enjoyed writing my books. (1) But I learned a lot along the way. I have great sayings posted in my office, like “If you want something you’ve never had you must do something you’ve never done.” And there are several more. But I learned they do no good unless I follow them. If I want the rewards, the satisfaction, then I have to pay the price. The work won’t get done unless I do it – regularly and faithfully. 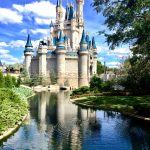 Goliath in 1 Samuel 17. I’m always struck by verse 25: “They said to each other, “Look how he keeps coming out to insult us. The king is offering a big reward to the man who kills Goliath. That man will even get to marry the king’s daughter, and no one in his family will ever have to pay taxes again.” Do you see it? You will never marry the princess until you first kill Goliath. 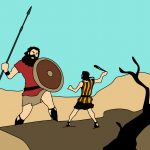 It’s up to you to arm yourself for doing battle. David’s comrades thought Goliath was too big to fight – David thought he was too big to miss. Like David, do not think about the bigness of the giant; think about the greatness of God. You will only overcome human weakness with divine power; you will only overcome fear with faith.  Verse 37: “The Lord who delivered me from the paw of the lion and the paw of the bear will deliver me from the hand of this Philistine.”  God will not do for you what you can do for yourself – so do your part and God will, as always, do His. If you believe you are on God’s side, drop the armor and the weapons that are hindering you. Pick up your stones and start hurling. As the old hymn “Yield Not to Temptation” puts it, “Each victory will help you some other to win.” You will never marry the princess until you first kill Goliath.

This principle is easy for me to say. Yet all my books, including the one I’m working on now, should have been finished earlier. I’m still trying to apply what I’ve learned. It’s much easier to slide and be satisfied with where I am and how I’m doing. But that’s not the goal – nor is it my calling. And there are always many obstacles in the way – many Goliaths loom large. But I will never marry the princess unless I first kill Goliath. I invite you – urge you – to go after your princess. I promise to go after mine as well. Let’s encourage each other. Only then can we say “Not to us, O Lord, not to us but to your name be the glory, because of your love and faithfulness.” (Psalm 115:1) Go now, and kill your Goliath! Ready or not Princess – here I come!